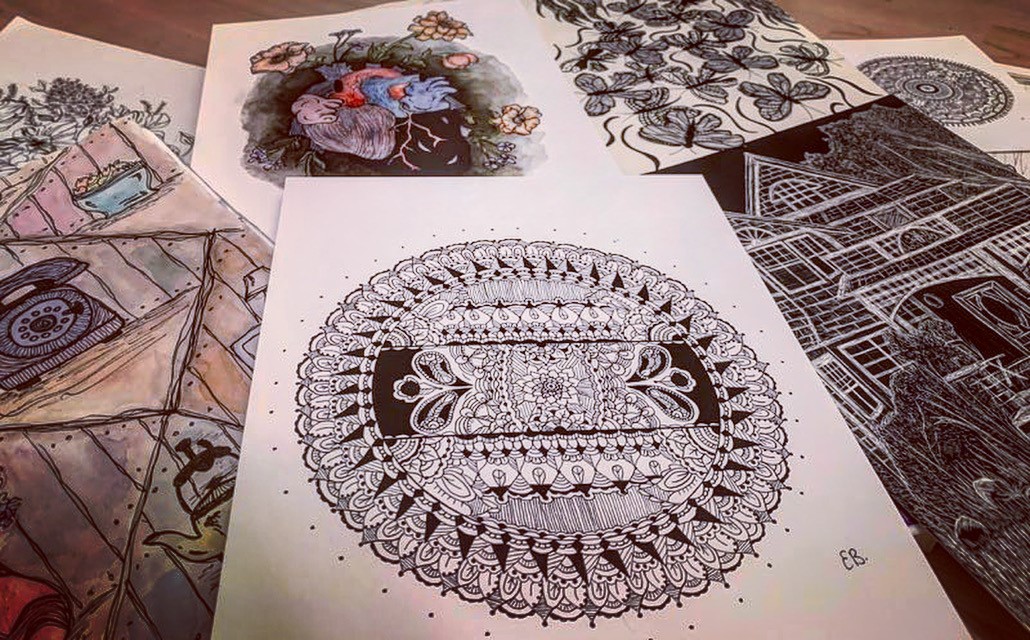 My friend Emma (yeah, I named you) reached out to tell me that she was completely stressed out. Her stress maxed because she was making art for someone. For those of you who do not create things regularly making something to give as a gift is hard A.F. (as the cool kids say). When you care about the person you’re giving the creation to the challenge increases. This was Emma’s dilemma. It was a Christmas gift (Ug!). And she had a deadline. This is pretty much the perfect storm for any creative person.

So, Emma (named you again) reached out to me for some feedback on her creation. She tried describing it to me: symbolic flowers, watercolor, elements of a mandala, lettering, a longer horizontal scale. She finished her text with It’s bad.

I asked for an image. She sent me a video of what she had done so far and told me about changes she was making. She expressed concern that her skills had gotten worse over the past month. To illustrate how stressed she was she also confessed that she dropped her paint brush into her tea. “I hate humaning.” She added. Humaning? Hm. I thought adulting was a challenge some days!

I asked her specifics because “just doesn’t look good” isn’t clear enough for me and I needed to understand what she was seeing. After a list the things that need improvement Emma also acknowledged that it wasn’t done yet.

What I didn’t tell Emma, but she probably kind of knew (which may be why she reached out), is that I have been where she is in the creative process so many times. No! Like SO MANY! I have made so much art on little or no sleep, that I somehow lost the final vision of. I had so little faith in my own ability to tie it all together. I have made art on a lot of sleep and just couldn’t bind my ideas together. I. Have. Struggled. So, I totally get where she was coming from.

Here’s the thing: as an artist, you should look at your work critically and technically—lines aren’t sharp enough, sections are disjointed, color isn’t cohesive. Blah. Blah. Blah. But just because an artist has a list of things they need to improve in their piece doesn’t make that work garbage. It makes that work needing to be worked on some more. Maybe. Once in a while we artists make some ugly shit and for me at least, it’s something I laugh at later. On the other side of that, pieces I felt were total garbage I look at years later and am sweetly impressed with my own ability.

In process I try to be less emotional about it. It’s not the news. “Oh my God, did you see that car crash, or Emma’s drawing, or so-and-so’s painting? It’s simply awful!” It’s a work in progress. It’s not awful. And, well so what if it is? Are we trying to achieve some finished perfection? I paused here and went to the internet to see what the so called perfect paintings are. Click here for somebody’s opinion.

We learn wisdom from failure much more than from success. We often discover what will do, by finding out what will not do; and probably he who never made a mistake never made a discovery.

Thanks Samuel Smiles! I agree with this guy.

As I shared my thoughts with her I had more to say. I told her to go grab a beverage (but not the one with the paint brush in it) because it was story time with Counios.

When I directed theater productions I would always tell the actors that the audience didn’t have a copy of the script so even if they made a mistake the observer didn’t know any better. They didn’t know what the original intention was. The job of the performer wasn’t to masterfully present the script, word for word, counted silences and perfectly choreographed stage directions, it was to put the audience in a mood. As long as the actors did not make their errors obvious the audience had no idea. This applies to a visual artist too. The person looking at your art has no idea what the original plan, or intention is. The creator knows what it’s about and what it’s supposed to be about—awe, hell sometimes they don’t even know if they are taking what I like to call the organic process route.

Even if you create something that is cringeworthy the receiver of the gift generally and genuinely (say that ten times fast) loves it. We are mostly all just big kids who love presents. Being a creator is not something that everyone is able to be or make time for. Trust me on this one. I know it for sure. In fact in adulthood I realize that very few people have time to create which is quite sad.

I remember reading a story in the paper a long time ago where a couple were married and a friend (and doctor) made them a painting as a gift. He could have purchased something expensive and generously gifted them something on their wedding register (they used to do that back in the day) but instead he made a painting. And despite his judgement he gave it to them and after the fact was quite embarrassed by his choice. As the bride told it, that painting was one of the most precious gifts she and her husband received on their wedding day. The toasters, the dishes, the towels eventually wore out, broke. But, this painting hung on their wall and stood the test of time. The doctor was embarrassed that he gave a gift he crafted but the couple just LOVED IT. We have to sometimes remove ego from our creation and let it be what it will be.

Learning to love what you are embarrassed about—it’s like fucking up incognito (thanks Emma). I mean it’s disguised. You know where your mistakes are but the people looking at your work don’t know where the mistakes are or what the intentions were. The errors exist but the work is pleasing, so is it really an error?

If we hold on too tightly to an idea are we not letting that thing become what it’s supposed to be.

**Update: Emma made some progress and it looked pretty good. The art had been defibrillated. And when the gift was given the proud art owner cried genuine tears. She loved it.

As artists, we can’t ask for much more.